Everybody wants to be rich. People commonly aspire to drive luxurious cars, wear expensive clothes, or live in extravagant seashore villas. It sounds exactly like the perfect life, right? Well, not always. Here’s the deal.

You don’t want to be rich; you want to be wealthy. What does that mean? Rich and wealthy are not synonyms. On the contrary, they’re a world apart.

You have to be able to differentiate the rich vs. wealthy people. After reading this article, you’ll know exactly how to do that. More importantly, you will learn what to strive for and who you should follow.

Never waste your time again following false idols and imitating behaviors that only lead to more financial distress. It’s time to learn who the real economic kings of the hill are.

Difference Between Rich and Wealthy

You’ll never see a financial expert use rich and wealthy interchangeably. Not only do they mean two different statuses, but they indicate two completely distinct mindsets.

Now, let’s dig deeper into the wealthy vs. rich topic.

Being rich simply means having access to a significant sum of money while lacking the financial knowledge to manage it properly. Rich people are those who have an expensive and unsustainable lifestyle that usually leads to a quick loss of cash.

To maintain their living standard and make up for their excessive expenses, they’ll usually incur debt. Their lives spiral out of control quickly—sometimes in a matter of days. Paychecks will fly away within one to two weeks, and they’ll eventually end up broke.

There is one huge difference between wealthy and rich people: financial independence.

Rich people own a lot of money without being financially independent. In fact, 70% of rich people go broke after a relatively short time due to a severe lack of money management.

Wealthy people, on the other hand, are wealth management experts. They know how to efficiently subdivide their income to treat themselves while consistently improving their financial standing.

They’re not interested in being flashy and grabbing everyone’s attention with expensive clothes or loud cars. They make their money last, investing it well and making the most out of it.

Another fundamental difference between rich and wealthy people is the ability to create and grow numerous reliable income streams. Wealthy people prioritize the expansion of their net worth over buying expensive stuff. In fact, you may have already crossed paths with a bewilderingly wealthy person without even noticing.

What does it mean to be rich?

Being rich simply means owning a considerable amount of money. Wealth usually comes quickly and easily for them, without putting in too much effort, such as getting an inheritance or winning the lottery.

Before diving deeper into this topic, it is good to learn the difference between old money and new money.

Moreover, a rich person cares more about looks than financial stability—that is, looking rich vs. being rich.

A lack of planning combined with a strong desire to upgrade their lifestyle will inevitably lead to a disastrous financial debacle. This is called “lifestyle inflation” and is the number one cause of rich people going broke worldwide.

What does this lead to? Well, usually an inflated ego and entitlement. Rich people think the world is already theirs by default.

What does it mean to be wealthy?

Wealthy people only worry about making the most intelligent economic decisions as soon as their paycheck comes in. A wealthy person’s expenses will be much lower than their income. Combine that with their financial knowledge, and you have the reason why they’re so successful.

Think about it. What do Shaquille O’Neal, Bill Gates, and Elon Musk have in common?

They’re all tremendously wealthy for the same reason. They’ve achieved the right mindset through sacrifice, sheer effort, making the right decisions, cultivating their strengths, and surrounding themselves with the right people.

Furthermore, people can become wealthy by getting an inheritance. It is called generational wealth, and it is crucial for people in that position to learn how to build up and pass it on to future generations.

What’s the Difference Between Rich and Wealthy?

Let’s break down and compare the differences between rich and wealthy people. We’ll analyze their actions, behavior, mindset, etc.

The rich mindset is entirely focused on the present. What’s going to make me look cool? How can I show off? What can I buy right now?

There is no sense of the future—no fear that, someday, their bank account will suddenly be empty. As such, they aggressively spend their money to buy items that later turn into liabilities. They may act complacent, justifying themselves by calling themselves “prodigies,” “big shots,” or “self-made men.” This type of thinking is destructive and unsustainable.

When it comes to the rich and wealthy, one difference is their mindset. Wealthy people don’t care about looking like they have all the money in the world. They focus more on building themselves a sustainable yet enjoyable lifestyle without breaking the bank.

They spend all their energy on productive things, such as networking and scrutinizing the market for new investments. Far from today’s toxic “grind culture,” they put great care into properly evaluating how much time they should dedicate to their personal life and their business.

Wealthy people refrain from calling themselves “self-made.” They know it’s a team effort, so they never act self-satisfied.

Instead of investing their funds in businesses and personal growth, rich people waste everything they have on virtually useless status symbols.

They hardly ever engage in any financial planning and don’t usually diversify their income, leading them to rely on a single salary that may be high but volatile. Investments are not well thought out.

Wealthy people do the complete opposite, investing wisely and consistently and opening up to diverse income streams to ensure financial growth and long-term security.

Their wealth is 100% sustainable and ever-expanding.

Rich vs. Wealthy Net Worth

Rich people have a lot more liabilities than assets, so they’re more than likely to be in debt and file for bankruptcy. They appear to have a lot of money, but in reality, they spend more than they earn, leaving them with a negative net worth.

On the other hand, wealthy people know how to build their wealth via multiple income streams and investments. When they earn money, they know how to spend it on assets as opposed to liabilities. They spend within their limits, leaving them with a positive net worth.

Let’s briefly sum up the differences between the rich and the wealthy in the following table: 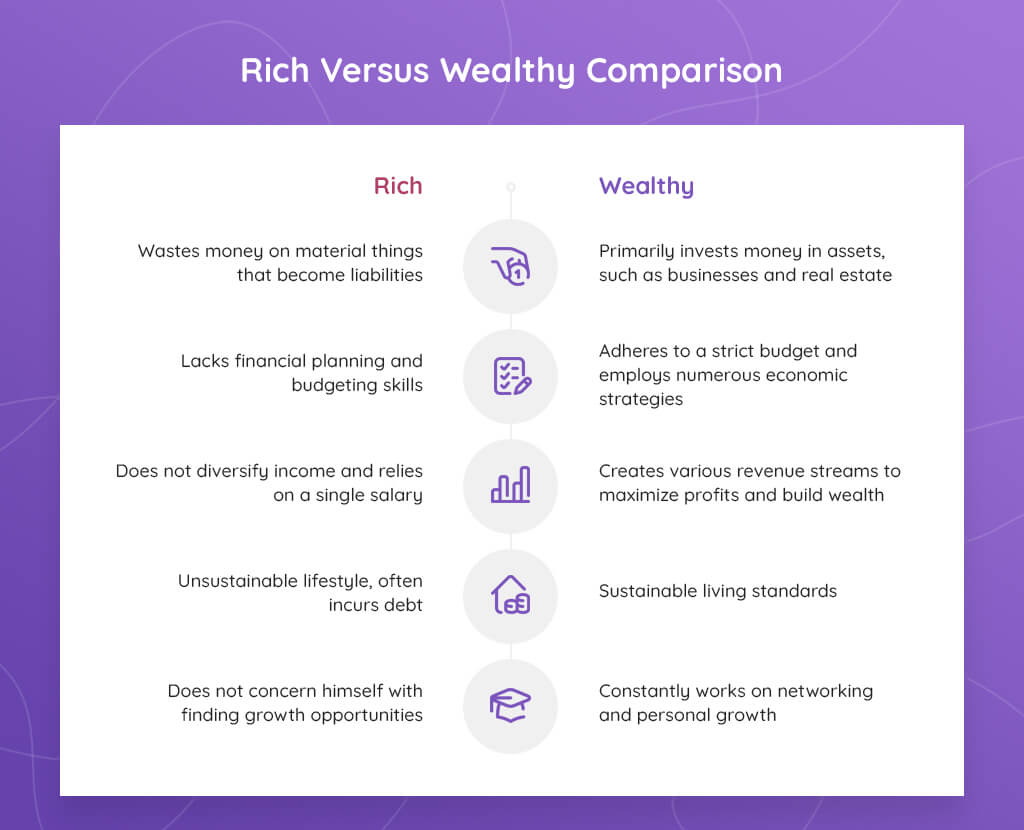 How to Become Wealthy

When it comes to building wealth, you don’t have to go digging for some secret trick. The truth is—it’s common knowledge. Let’s analyze what wealthy people do.

What Is the Net Worth to Be Considered Wealthy?

According to Schwab’s 2021 Modern Wealth Survey, to be considered one of the wealthy, you need a net worth of at least $1.9 million—more than double the net worth of the average American household.

However, we don’t believe that this is the correct way to categorize someone as being wealthy. Regardless of how much money you have in the bank, your mentality and actions will help you level up from rich to wealthy.

Now that we’ve mentioned net worth, let’s establish its difference from wealth.

Net Worth vs. Wealth

Like rich and wealthy, these two terms are sometimes used interchangeably, although they mean two very different things.

Wealth is a commonly used term to indicate how much money somebody has, either in goods or hard cash.

Net worth is a common way to measure wealth that takes the overall market value of all assets somebody owns (intangible ones included) minus all debts and liabilities.

Although some of these words of wisdom may be overused, they haven’t completely lost their meaning and intention. We are sure some of them will enlighten you or at least give you something to think about.

Here are additional quotes on the wealthy vs. rich definition:

Have you found out everything you wanted to know about the rich vs. wealthy? In that case, what will be your first step towards becoming a wise, wealthy person?

We hope you found this article helpful. Still, do not forget about things money can’t buy. Good luck out there!