Walmart’s first store was opened in Rogers, Arkansas, in 1962. As Walmart statistics show, its beginnings were humble, but it has become the retail giant we know today.

Walmart is a synonym for big discounts and hypermarkets in the US. Furthermore, it’s known for its massive selection of items. Walmart has stores all over the world, and it continues to grow.

That’s why we’ve prepared the latest statistics to showcase Walmart’s power, along with some interesting facts. So let’s dig in!

Before we dig into stats, let’s cover the basics. Walmart is a retail giant for a reason, so let’s check the data that backs this up.

Many people would say that the top spot belongs to Amazon, but they’d be wrong. As Walmart’s total revenue is $538.15 billion, the company still holds the top place in retailers’ global ranking.

Moreover, Amazon stats note that Amazon is second with $330.20 billion, while Schwarz Group has $158.58 billion in revenue and takes the third spot.

Still, Amazon leads the way in the e-commerce market, ranking as number one. It is also the biggest publicly traded company.

In other words, that was a growth of $35 billion YOY. In constant currency, this growth amounted to $40 billion. All in all, the company’s annual revenue is derived from thousands of stores worldwide, as well as its ecommerce platforms.

3. Over 5,000 Walmart stores are currently open and active in the US.

When looking at other Walmart company statistics, it’s important to know that not every Walmart store falls into the same category. These stores can be discount stores (which, initially, all Walmart stores were), supercenters, or neighborhood markets.

In recent years, Walmart has been investing heavily in digital initiatives to better compete with Amazon.com, Inc.

In addition, the company is expected to continue investing in its e-commerce business and expand its international presence to drive growth.

This was made possible partly due to the large number of visitors to its website—on average, 410.3 million people visited the site per month.

Walmart facts show that users spent around 4 minutes on the website per visit and went through 5.2 pages.

7. After the United States, Mexico has the most Walmart stores.

There are 2,755 Walmart stores in Mexico. In general, Walmart is a major player in the Mexican retail market and is definitely one of the country’s largest employers.

Regarding Walmart sales by category, stats show that most shoppers buy groceries. This means that Walmart’s grocery sales accounted for a greater proportion of its total sales mix.

This is an important metric because it shows that Walmart sells more groceries than other items. This is likely due to Walmart’s focus on expanding its grocery offerings and efforts to make groceries more affordable.

Walmart supercenters are the largest type of store. They offer a wide variety of merchandise, including groceries, electronics, and apparel. Supercenters also make up the majority of Walmart retail sales.

Walmart discount stores are smaller than supercenters, and there are 367 of them in the US. They typically carry a limited selection of merchandise. 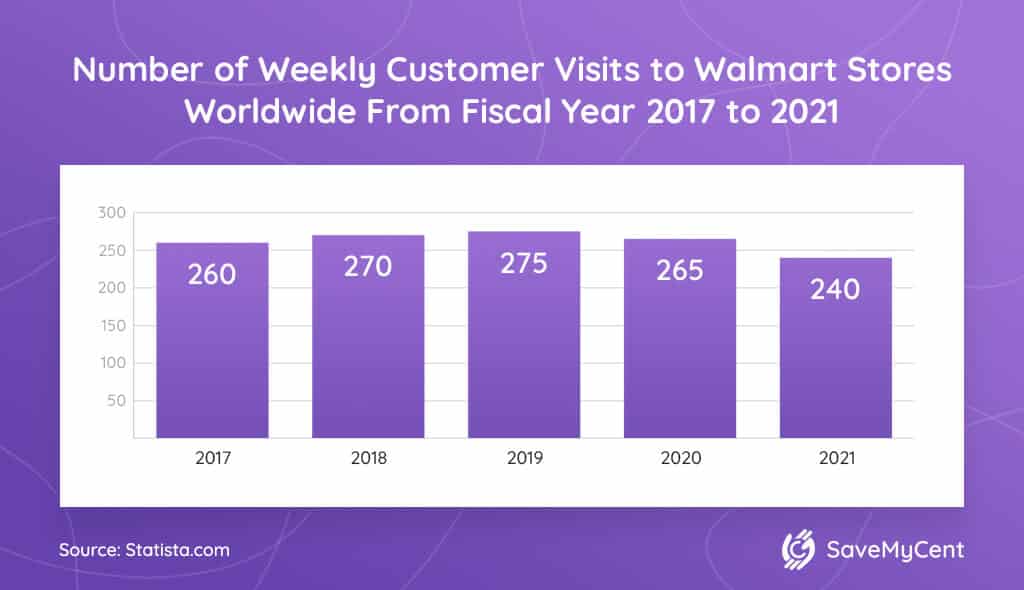 In 2020, Walmart saw a significant uptick in the number of people visiting each week. However, that number has since declined, and it’s estimated that weekly, only 240 million people visited Walmart stores in 2021 and 230 million in 2022.

11. 90% of the US population has at least one Walmart store in the 10-mile vicinity.

This is one of the best-known facts about Walmart. Walmart’s shopping philosophy is quite simple—the company wants to be a go-to shopping center for most household items.

The company has achieved this goal, as almost the entire population of the US doesn’t need to travel more than 10 miles to reach a Walmart store.

In 1983, Walmart opened its first Sam’s Club store under its subsidiary company of the same name.

This follows a similar pattern to Walmart’s client base. While Walmart does have a diverse customer base, the largest percentage is made up of White customers.

This is likely because Walmart is based in the United States, where the population is predominantly Caucasian.

14. As per Walmart stats, Walmart Plus has around 11 million members.

Walmart launched its membership program called Walmart Plus on September 15, 2020. By offering many advantages such as free delivery, discounts on prescriptions and fuel, and Scan & Go feature, Walmart’s intention was to compete with Amazon Prime.

That represents an increase of 11% over 2021, according to ecommerce growth statistics. All in all, Walmart US is the company’s largest and most profitable sector and operates retail stores in all 50 states and Puerto Rico.

Walmart is one of the biggest employers in the US private industry, offering retail careers for many. Although the company has been criticized for lowering employee benefits in recent years, it’s still the stepping stone for many who are just starting a retail business career.

One of the interesting facts about Walmart is that the company takes pride in its military-friendly community. Supporting the military community is just one of the many reasons the company is so popular with shoppers.

17. Walmart employs more than 2.3 million workers all over the world.

Retail stats uncover that the company is proud to have one of the biggest workforces. As a matter of fact, Walmart continually offers a range of careers. According to Walmart statistics, the company employs 1.5 million workers in the US alone.

18. Walmart is the biggest employer across 22 states in the US.

Starting a retail career with Walmart is almost an inevitable step for many people in the US. In fact, Walmart is the biggest employer in 22 states. The largest number of Walmart stores is in Texas.

19. A large number of Walmart employees (64%) are employed full-time.

This may come as a surprise to some, given the common perception of Walmart as a low-wage employer.

Check out this article to find information about how to get a job at Walmart and how old you have to be.

20. Women account for 54% of Walmart employees in the US.

This includes 44% of managers and 34% of officers working in the top Walmart stores in the US. However, women made up only 49.8% of new hires in the first half of 2021.

As workplace diversity has become the norm in private companies, Walmart often emphasizes diversity among their employees.

Furthermore, the average time an employee stays with the company is 3.3 years, as per Walmart employee statistics. So, these numbers show that Walmart is a company that offers its workers a living wage and job security.

Overall, Walmart is one of the largest employers in the United States, and its success is built on the hard work of its employees. By offering competitive wages and keeping turnover low, Walmart ensures that its shelves are stocked and customers are satisfied.

Among other Walmart employment statistics, it should be noted that people of color are well-represented among workers. They comprise 49% of the workforce, with 39% employed in management and 27% as corporate officers.

23. The company has introduced online degree programs for its employees for $1 a day.

In other words, in an effort to have a more educated workforce, Walmart kicked off a program that offers its workers an option to enroll in degree programs, charging them only $1 a day.

So, workers can choose from degree programs in business, technology, supply management, etc.

Now that we’ve covered Walmart’s basic stats and recent statistics on its workforce, let’s check some interesting facts about the company. Walmart has been around since 1962 and made a mark in US retail history. Keep reading!

24. Walmart was the top grocery location for gun violence incidents between January and May 2020.

Walmart has been working to improve its security in recent years, but the company’s stores are still places where shootings, robberies, and other violent crimes occur.

On average, Walmart supercenters are spread across 179,000 square feet, but this one, located at the Crossgates Common shopping center, has 260,000 feet and spreads over two floors.

Moreover, Walmart Black Friday statistics note that Walmart took the lead in brick-and-mortar sales on Black Friday, with nearly 59% of in-store shoppers opting for one of the company’s locations.

27. Walmart shopper statistics show that over 45% of mobile users who shop at Walmart are between the ages of 25 and 34.

This m-commerce stat is not surprising given that this age group is highly adept at using technology. They are also more comfortable with making purchases online.

28. Texas is the state with the highest number of Walmart stores.

All in all, Walmart stores can be found in 2,550 cities across the United States, and five of the top 20 cities with the most Walmart stores are located in Texas. For instance, San Antonio ranks first, followed by Houston, Orlando, and Jacksonville.

29. The Walmart average transaction size per visit is around $50.

At Walmart, the average shopper picks up about 13 items per visit, with a total transaction value of $54. This works out to be about $3,400 per year per shopper.

Walmart is able to offer such low prices by carefully monitoring its supply chain and using its massive economies of scale to drive down costs.

This allows them to pass on these savings to their customers, resulting in a win-win situation for both shoppers and the company.

Walmart theft statistics show that the retail giant deals with significant losses due to theft. To stop this, the company introduced AI cameras based on computer vision technology in 1,000 stores to monitor store check-outs.

Walmart is perhaps the best US company witnessing how entrepreneurial spirit can take one’s efforts far in the game. What originally started humble and small is now a gigantic worldwide business.

Even when it’s criticized, our collection of Walmart company statistics proves that Walmart remains the top retail business with millions of loyal customers.

Walmart is continuing to grow and expand, both online and in physical stores. If you’re looking for a one-stop shop for all your needs, Walmart is definitely worth considering.

How big is Walmart?

How many employees does Walmart have?

The company employs more than 2.3 million employees worldwide. In the US alone, 1.5 million are employed.

How much money does Walmart make?

Walmart’s net sales worldwide have been rising almost every year. In 2021, the company earned $559.2 billion in revenue.

So, how much does Walmart make a day? Walmart’s daily revenue is somewhere around $1.6 billion.

How many Walmarts are in the US?

Is Amazon bigger than Walmart?

The competition between Walmart and Amazon is certainly a heated one. Amazon has achieved incredible success in recent years but still hasn’t surpassed Walmart’s annual retail revenue.

How many people shop at Walmart?

Let’s take a look at the info from the last three years. On average, 265 million people globally visited Walmart stores per week in 2020. Moreover, Walmart statistics show that the weekly number of customers in 2021 was 240 million and 230 million in 2022. 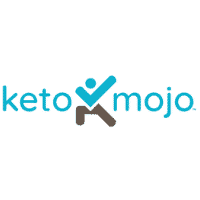